Meghan Markle and Prince Harry are raising one special son!

Baby Archie Harrison is already making a splash on his royal tour debut. On Wednesday, the 4-month-old made his first official appearance with his parents during their 10-day tour of Africa. As if that weren’t exciting enough, later in the day, the Duchess of Sussex gifted her little nugget’s hand-me-downs to a charity that supports mothers with HIV.

Meghan visited the Mothers2Mothers organization in Cape Town, however, her baby boy wasn’t with her during that time. While on her first solo trip, the former Suits star brought a large duffle bag that was full of Archie’s clothing. Some items included two of his tiny white vests—one featured the words “The Future” while the other had the Invictus Games logo.

“Here’s a few little things that I thought would be helpful,” the Duchess of Sussex shared, as showing each piece of clothing. “The Future. And he’s outgrown his Invictus one.”

She later joked that her son would’ve probably gotten “crabby” if he joined her on this trip. “I can’t be the only one sitting here,” Meghan quipped. “I think if Archie were here and we had all these toys in the middle and I made him sit in a chair it would be so unfair.” 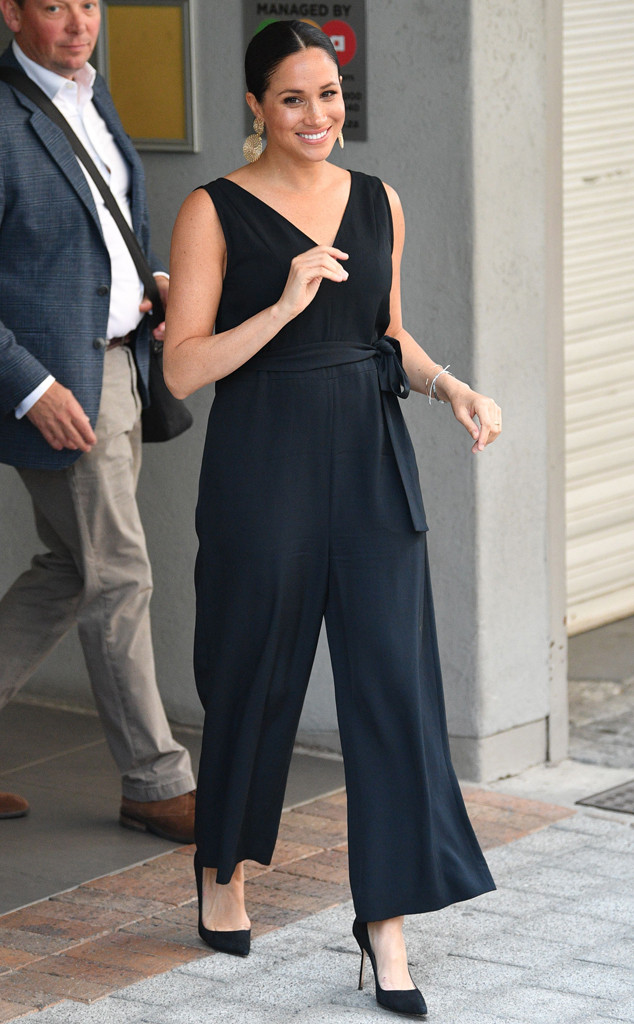 For the special occasion, the 38-year-old royal dressed in a chic black Everlane jumpsuit, which she previously wore while working on her British Vogue cover shoot. She paired her ensemble with Gas Bijoux earrings and classic black suede pumps by Manolo Blahnik.

Of course, in true Meghan fashion, she kept things casual and intimate during her solo trip. While visiting with the not-for-profit organization, she asked the women in attendance to join her in sitting on the floor. It didn’t take long for the Duchess of Sussex to notice a 15-month-old girl named Asiville, who was rolling around and having a ball.

“Look at who’s having the best time, living her best life,” the former Suits star said with a laugh.

“It’s so important we’re able to share what’s worked for our family and know that we’re all in this together with each other,” a message read on Instagram. “So we wanted to share something from our home to each of yours.”

Earlier in the day, Meghan and Prince Harry introduced their baby boy to Archbishop Desmond Tutu and his daughter Thandeka Tutu-Gxashe. “Arch meets Archie,” the royals captioned their joint Instagram, alongside a clip of the cute moment. “Archie loved meeting you,” they wrote in another post.

During Archie’s royal tour debut, the archbishop’s daughter teased that the newborn seemed to still be adjusting to the spotlight. “He’s an old soul,” Meghan said, as she cradled her little nugget, who wore adorable blue overalls from H&M and a white tee.

Although, Harry suggested his son is “used to it already.”