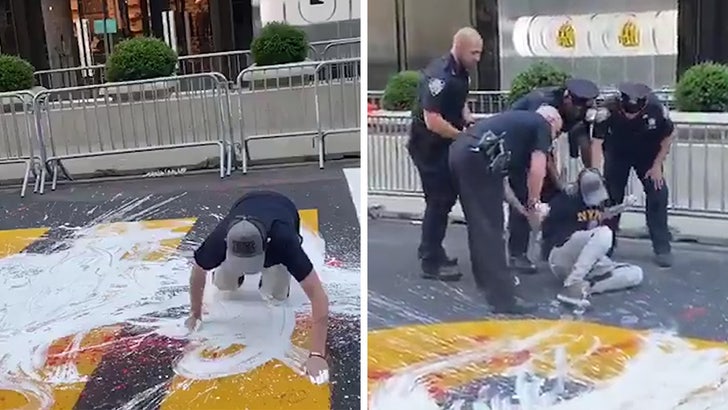 A NYC man was so intent on painting over the Black Lives Matter street mural in front of Trump Tower … not even cops pulling him off the ground was gonna slow him down.

This wild incident went down earlier this week in the Big Apple, right in front of Trump’s signature building and residence on 5th Avenue — where a giant ‘BLM’ street mural was recently etched and painted right out front. It was vandalized … again.

The camera starts rolling right in the middle of the action, with the guy in question on his hands and knees … frantically trying to spread white and red paint over the yellow ‘BLM’ lettering. He’s literally spreading it with his own limbs, and doesn’t care who’s watching.

Eventually, some NYPD cops roll up and put a stop to it. Even when the responding officer gets right up in his face and tries yanking him up, the guys keeps at it — smearing every last drop he can. It’s insane … eventually, more cops come and restrain him.

The officers also shoo off the people that are recording, but we get the gist of it. BTW, the guy kicks a paint can as he’s being led away … perhaps as his final act of defiance.

Cops say they arrested Mark David Hutt for criminal mischief and gave him a desk appearance ticket. This marks at least the fourth time the ‘BLM’ mural has been vandalized since it was painted July 9.

Of course, it’s not the only place a ‘BLM’ mural has been tainted with paint. Another Trump-related vandalism act went down after 4th of July in the Bay Area. Those folks used paintbrushes to make a mess — but hey, some people are old-fashioned with their dirty work.