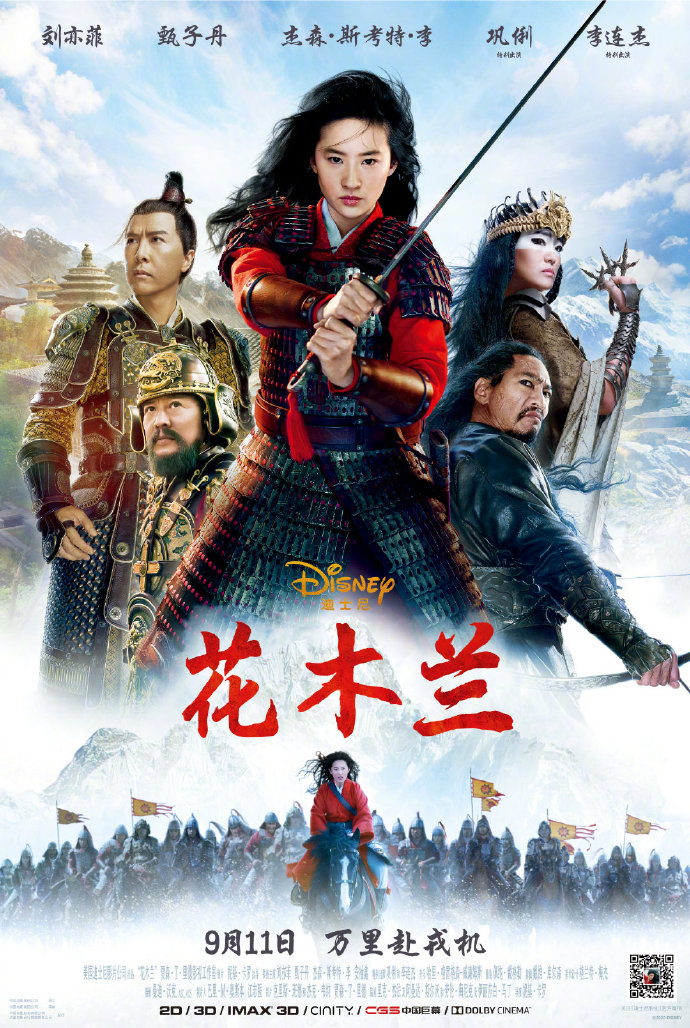 Refresh for latest…: Disney’s Mulan ultimately settled for a $23.2M three-day opening in China, including previews. This is about where we saw it landing yesterday after downgrading projections for the Middle Kingdom launch. The movie from director Niki Caro ended up in the No. 1 spot for the session there, but was bested on Sunday by local title The Eight Hundred (now at an estimated $389M cume).

The film stars homegrown talent such as Jet Li, Gong Li, Donnie Yen and Liu Yifei, and is based on a Chinese folk story. But, it has been hit with low social scores (7.6 on Maoyan and 4.9 on Douban — the latter slightly up today). And, of course, given the movie released on Disney+ a week ago elsewhere, piracy is an issue. In the wake of several U.S. Senators and Congress reps calling out Disney’s cooperation with elements of the Xinjiang Uyghur Autonomous Region’s security and propaganda authorities in the production of the film, there is also a reported blackout on local press covering the release. However, it is not clear how much the recent stirs outside China have affected the box office performance within the market.

The full weekend on Mulan was $29.1M from 17 offshore markets for a $37.6M international cume.

Mulan‘s China opening is 23% ahead of Aladdin which finaled at $53M+ in the non-COVID era. Maoyan is now projecting a $41M finish for Mulan in the market. Disney notes that the overall market is down 48% versus last year and that 91% of sites are currently open, but with 50% capacity restrictions.

Elsewhere, Mulan debuted No. 2 in Russia for a $1.8M four-day weekend. Capacity restrictions apply there as well while the market is about 70% open and 31% off compared to 2019 at the same time. Other new opening markets include No. 1s in Ukraine, Hungary and South Africa as well as No. 2 in Poland. In its second weekend of release, Mulan held the top spot in Malaysia, Singapore and Thailand. In the Middle East, the film dropped by just 9% from its opening weekend. The Middle East as a whole is the 2nd biggest market behind China with $4M, followed by Thailand ($2.3M), Taiwan ($1.9M) and Russia.

We are waiting on Tenet numbers as well as others, so check back for updates.