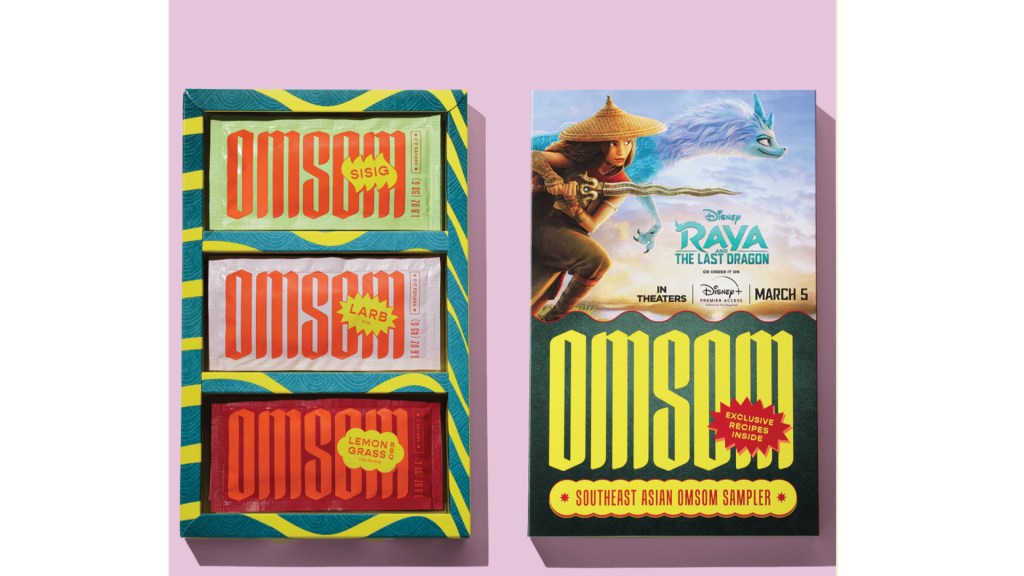 EXCLUSIVE: Today, Disney rolls out Raya and the Last Dragon, what is arguably its first domestic theatrical hybrid release; second worldwide if you count Mulan. The animated movie which is booked at 2,045 theaters, sans roughly 250 Cinemark locations, but including the newly reopened New York City market, is on its way to grossing a notable $3M today and between $9M-$10M domestic this weekend per industry estimates and that’s with an availability on Disney+ for the extra price of $30.

So, when it came to building a roster of promotional partners, Disney’s SVP of Global Marketing Partnerships & Promotions, Lylle Breier, and her team, took into account the title’s home audiences and growing theatrical moviegoers during the pandemic.

Even more notable about the Raya and the Last Dragon campaign, not only is Disney linking up with brands that are authentically Asian and true to the spirit of the movie, but the motion picture studio is getting behind and propping a number of homegrown, young advertisers.

“We have great broad, general market partners McDonalds, LG, P&G, and Kellogg’s, but we also wanted to make sure to mix our promotional program with some authentic Southeast Asian brands, like Omsum and Sanzo, to really reflect that this movie is such a beautiful tribute to Southeast Asian culture,” Breier tells Deadline.

“We have very smart cultural consultants on the movie, our filmmakers and cast are amazing and very involved, and so we made sure to go to brands that are very authentic,” she adds.

Disney worked with agency Gold House in finding partners such as Omsom and Sanzo, which jibed with Raya‘s story of a female warrior who is determined to find the last dragon in a realm known as Kumandra, a re-imagined Earth inhabited by an ancient civilization.

“It’s a contemporary movie, and it’s happening at an unprecedented time in the world, and so we wanted to have a modern campaign where we could find some excellent brands that are doing a good job of meeting people where they are, just like the choice we are giving our guests to see the movie either in movie theatres or on Disney+. Obe Fitness and Raddish cooking club are two brands that have really met the moment, and are thriving,” Breier explains.

Water is an important motif in Raya, so Disney teamed with the first Asian American inspired sparkling water, Sanzo, started by Filipino American Sandro Rocco. The promotion focused on the Calamansi flavored water, a tart citrus fruit native to the Philippines and other parts of Southeast Asia. The Raya-Sanzo campaign includes a custom ad spot, paid social support, and a takeover of the beverage’s website.

In targeting the pic’s prime demo, Disney hooked up with Raddish, the leading monthly subscription kit and cooking club for kids, with recipes created specifically for them to learn key culinary skills and grow confidence in the kitchen. The campaign consisted of a social media sweepstakes, a custom spot, digital media, two content pieces and three Raya-themed custom recipes and kits with cobranded packaging. Of particular note, there were cook-along events and a Facebook Live, featuring Southeast Asian Chef David Nguyen from Walt Disney World’s Magic Kingdom Park, who spoke to the importance of food and culture within Raya.

Also building on the pic’s food theme and femme power, the studio found an ideal partner in Asian spice and sauce brand Omsom, cofounded by sisters Vanessa and Kim Pham, who are first generation Vietnamese-American, daughters of Vietnamese refugees. Omsom will feature Raya themed packaging on their Southeast Asian sampler with recipes, along with a custom ad, and pushes on their social media and website for the feature.

Drawing at-home millennials’ attention to Raya was also a priority for Disney, and live and on-demand fitness instructor Obe served as a prime advertiser for the studio.  Qui Nguyen, co-writer and fight choreographer of Raya and the Last Dragon, met with Obe instructors to discuss the inspiration for the film, the fight styles, and how these styles have played a role in health and fitness across many cultures. From this six ten-minute Raya inspired classes were created, inspiring families to be strong and to discover the hero inside, including Kumandran Magic Sculpt, Kumandran Magic Dance Cardio, Battle Squad Family Friendly Strength, Battle Squad Family Friendly Dance HIIT, Heart of Raya Strength, and Heart of Raya HIIT (High Intensity Interval Training). Overall, the Obe campaign generated 3.8M impressions.

Automakers are typically the biggest promotional partners who bring a sizeable amount of cash to a campaign, however, they’ve been greatly challenged during the pandemic with decreased sales and a delay in delivering last year’s models. That said, fast food advertisers’ takeout and and drive-in business continues to boom during Covid, with such brands providing the second-sized best chunk of cash value to a pic’s campaign. McDonalds has been a longtime partner of the Burbank, Ca studio and they’re delivering a 360-degree campaign including Happy Meal branding and action figures from the pic as well as a custom spot along with digital activation. All in 70M Raya figures will be available across 20K McDonalds restaurants.

Other perennial Disney promo partners returning for Raya include Proctor & Gamble‘s Oral-B toothbrush and Crest toothpaste which will be emblazed with the pic’s logos and heroine. Those licensed products will be available at Target and Walmart. Kellogg’s will also be promoting the movie on their social channels.

As Disney raises the profile of their streaming service Disney+, they want audiences to know how they can bring the movie theater experience home. Similar to the second season of The Mandalorian which teamed with the Sonos sound bar, LG OLED TV was a the big tech partner on Raya. The TV line is known for its intense color and perfect blacks with no flicker and minimum blue light — ideal for watching the vibrantly colorful feature from filmmakers Don Hall and Carlos Lopez Estrada. LG’s marketing included a custom spot, digital and social pushes, and in addition they sponsored the Raya and the Last Dragon red carpet launch event live stream “Learn to Draw”.

“No brand is too small if the quality is there, if the authenticity is there, if the commitment is there, and if we can make a program that is really good; that is first,” exclaims Breier’s about Raya‘s promo partners, “Our promotions team is very caring, specific, and thoughtful about every movie we work on. No campaign is alike”